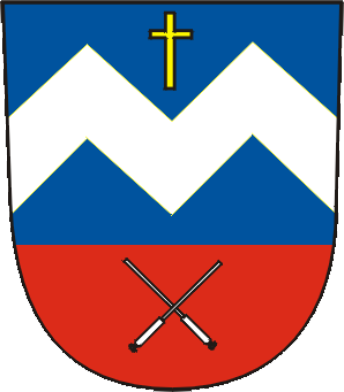 
The municipality Moldava is situated on the old salt route from Hrob to Frauenstein in Saxony. In the course of time Moldava was divided into the upper and the lower part. The upper Moldava is located near the border crossing and the railway station, the lower Moldava lies in the neighbourhood of former mines and the Chapel.
The colonization of the area around Moldava is dated back to the Younger Stone Age as it is proved by archaeological findings. Attracted by the natural resources in the border forests glassblowers came to the Ore Mountains. A lot of wood is needed for the glass-blowing industry. The first records of glass-blowing industry in Moldava in the Rýzmburk (Riesenburg) estate come from 1932. These are receipts for wood stored in the state archive in Dresden. The existence of glassworks is supported with a document from February 4, 1398, when Boreš of Rýzmburk sold the forest glassworks to William of Meissen. In 1346 a name Mulda appeared in church accounts of the Meissen Chapter. In that year, the wooden chapel was also probably built.
By special research five glassworks were found in the neighbourhood of Moldava. Later they became a part of Nature trail “Po stopách sklářství na Moldavě” (“Following the Medieval Glass in Moldava”) Between the years 1537 and 1547 the king Ferdinand I established exact land borders and Moldava became a part of the Czech lands. In 1560 silver was mined in Moldava, nevertheless the mines were closed soon.
Thanks to the proximity of the frontier there were no problems with the Protestants and the Catholics. After forced catholicization the people living in Moldava went to church services in neighbouring Hermsdorf and the Catholic chapel remained empty. The event was accompanied with escapes from the country. Since 1678 there was a parish priest at the Moldava Chapel of Navštívení Panny Marie. During The 30 Years War Saxon, Swedish and also imperial soldiers went through Moldava and Valdštejn ran away through Moldava after the defeat at Lützen. Teresian Cadastre informs about 37 farmers, 4 millers, a shoemaker, a tailor, a carpenter and a tapster. People bred cattle and worked in the forests. Wood from Moldava was exported to Saxony mainly to mines in Freiberg. There are large peat bogs among Moldava, Oldříš and Nové Město. Peat was mined and exported from the mountains to the spa town Teplice or out of the country. The year 1787 gives information about 81 houses and another 4 houses from the settlement Vápenice. At the beginning of the 19th century an Austrian customs was established on the route between Mikulov and Freiberg.
There were 701 inhabitants and 105 houses in Moldava in 1833, after next ten years there lived 741 people in 112 houses. In 1850 villages Pastviny and Oldříš were attached to Moldava but later on they were separated again.
The school in Moldava was founded in 1792. In winter it was run as a one-room school. It was transformed to a two-room school when it was moved to a new building in 1870. The school in Moldava was also attended by children from Pastviny up to 1867.
In 1880 there lived 723 inhabitants, in 1885 there were 125 houses and 732 people, in 1890  136 houses and  864 inhabitants of which 23 were of Czech origin, in 1921 there were 114 houses and 930 inhabitants (43 Czechs) and in1930 there lived 875 people.
Between the years 1871 and 1884 the railway line Most – Dubí – Moldava was built. The line went on further from Moldava to Saxon Holzhau, Freiberg and Saská Kamenice. It was used for the transport of coal, mined ore and wood from the Ore Mountains and for transportation of tourists. In 1997 the bigger part of this railway line in the Czech area was declared to be a national monument. After the world war the rails were torn up and the former regime did not allowed to lay them again. In the lower Moldava a fluorite-barite vein, the most important in the whole Bohemia, was discovered in 1960.
In the 60s Moldava and Nové Město were united.


Nové Město lies on the way from Mikulov to Moldava, the houses stand along the road. There is also a railway station on the route between Most and Moldava.
The first mention of Nové Město comes from August 25, 1341, when John the Luxemburg allowed Boreš of Rýzmburk to establish a new route leading through the Rýzmburk Castle to Dlouhá Louka and further in the direction of Nové Město and Pastviny and Saxon Rechenberg and Frauenstein. The route was popular and the little town had a big profit from tariffs. During the Hussite Movement the frequency of border crossing lowered. In the 15th century a pedestrian paid 1 groat for an entry to Bohemia, a horseman paid 2 groats and a wain paid 4 groats. On July 26, 1438 Friedrich Míšeňský issued a Privilege in which the tariff at the customs in Nové Město was set. The route lost its importance during the reign of Ladislav Jagellonský.
Originally the village was called Strassburg, later the name Nové Město appeared. According to the Teresian Cadastre there were 33 houses, a glass-melting shop, a mill and a forester’s lodge at the end of the 18th century. The village belonged to the estate of the duke Ferdinand Lobkovic. Between 1793 and 1805 there was Josef Eustach Horand’s cotton spinning manufacture. In its boom time 90 workers were employed in the manufacture. The ready yarn was further processed in Verneřice. In the first half of the 19th century there were 201 inhabitants and 33 houses, a sawmill, a tavern, a mill and a forester’s dwelling in Nové Město. All people were of German origin.
There was also established a branch of the school in Mikulov. It was a one-room class with 23 pupils and in 1885 there were already 47 pupils. However, at the beginning of the 20th century the school was closed and children attended a school in Mikulov. Nové Město did not have and still does not have its own post office, a vicarage and a church. In 1885 there were 37 houses and 187 inhabitants, Catholic Germans.
People worked in forests and on farms. There were also several craftsmen who fulfilled villagers’ demands and a financial station. In 1886 a hermitage Willersdorf –Vilejšov and 24 houses on Oldříš-Grünwald fallow lands also belonged to Nové Město. After the year 1922 the municipalities became independent of each other again. Residents were of German origin and after the displacement of the Sudeten Germans the village remained empty. Nowadays Nové Město serves as a recreational area and it is a settlement of the municipality Moldava. Only eight houses were preserved from the original buildings. There are several mountain lodges. Nové Město is often visited by holidaymakers, cyclists and tourists in summer and cross-country skiers in winter.


Ullersdorf, in Czech Oldříš, was a typical mountain village with houses scattered on a valley plain on the way from Nové Město to Pastviny, Mackov, Vilejšov and Fláje. Oldříš was situated above the village Moldava. Oldříš and Pastviny were united with Moldava in 1850.
In old guides the village is described as the start of a Mountain Walk from the railway station in Moldava. The Walk offers fresh mountain air, good water and wonderful sight of the region. In 1885 there were 76 houses and 386 German inhabitants in Oldříš. In winter it used to be a paradise for skiers, above all cross-country skiers. After uniting Moldava, Pastviny and Oldříš into one municipality there were altogether 1751 inhabitants in 71 houses in 1850. One hundred years later, there were 1865 residents in 274 houses, but after another twenty years there was an obvious difference: 970 dwellers in 140 houses and the number is still lowering.
Oldříš does not exist today. In the place of the village there are pastures for cattle and sheep from the farm in Moldava.


The village Pastviny was situated not far from Moldava on a side road of the route from Oldříš to Vilejšov. The village was also connected with Moldava through a path leading to the customs on the frontier with Saxon Holzhau. The first mention about the village was found in the Urbam Book of Duchcov and it comes from the year. At that time it belonged to the estate of Rýzmburk. According to a fiscal cadastre it belonged to the estate Libčeves since 1654. The fiscal cadastre informed about 20 peasants and 4 crofters. The Teresian Cadastre indicated that Ferdinand of Lobkovice was an owner of the village and that there were 18 farmers, a butcher, a shoemaker, a blacksmith and residents of German origin. In 1869 there lived 401 people in 78 houses in Pastviny. In 1885 there were 392 residents in 70 houses, 320 people in 58 houses in 1928 and 17 inhabitants in 64 houses in 1948.
Up to the year 1873 the village Pastviny had been united with Moldava and then it became independent. A parish was still in Moldava and a post office in 6 kilometres distant Mikulov. A school was originally one-room and it was attended by 70 pupils on average. Before the World War I it was extended to two rooms with the total number of 75 pupils.
People were engaged in agriculture, farming and home production of objects from straw. There was a sawmill, two mills, a customs and a financial station. In the neighbourhood of Pastviny there are large peat bogs with special flora. In the past century peat was mined and used as a fuel, a bedding material, for wrapping porcelain or glass etc. The residents of Pastviny worked in peat mining. The peat was processed in a factory near Nové Město which belonged to the family of Lobkovice. Futhermore the people worked in the forest. The wood was exported to Saxony. People were of German origin; in 1947 there was only one Czech of 74 people. The others were Germans. At the beginning of the 20th century there were two guilds – Landwirtschaftliche Verein and Ortsgruppe des Bundes der Deutschen in Böhmen.
Josef Beer, the first solo clarinet player in Europe, was born in Pastviny on May 18, 1744. He was a concertmaster of court opera in Berlin, where he also died in 1811.
Pastviny is today only a large meadow with a beautiful pond near the border with Saxony.
(written by: Mgr. Markéta Kvasňová)